Coolmine Primary School opened on Monday, 2nd July 1973 in prefabs where Scoil Oilibhéir now stands. On that first day, there were a total of 62 pupils – 35 boys and 27 girls. Of these pupils, 48 were in Junior Infants. The original teaching staff were Mr. Michael Bowler (Principal), Ms. Hannah Reidy, Ms. Phyllis Finnan and Ms. Mary Hogan (later Ms. Nolan). Rev Canon Crowe(RIP) was Manager, supported by the secretary, Ms. Mary Kenny, and caretaker, Mr. John Clince (RIP). These were the days before Boards of Management came into being. 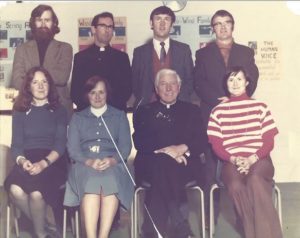 The school grew rapidly and meanwhile work was in progress on the new buildings in Roselawn. Though the grounds were far from complete, the buildings were ready for use by the middle of 1976. In the first week of July that year, all the pupils and their teachers took their belongings and walked from the prefabs in Coolmine down Clonsilla Road and took residence in what was later named St. Francis Xavier Schools. The name was chosen by the late Canon Morgan Crowe.

The school continued to grow and due to the significant development, it was decided to divide it into the Junior and Senior schools for the new school year. On July 1st 1977, the Senior School began with 170 pupils – 88 boys and 82 girls and classes from 3rd to 6th. Five teachers moved from the original school to the new Senior School: Mr. John Fleming, Mr. Peter Gallagher, Ms. Phyllis Finnan, Mr. Séan Hogan and Ms. Ruth Gunning. Mrs. Geraldine Guiney (RIP) was appointed in September and later that year, Mr. Paddy Boyle was also appointed to the staff.  The school population continued to grow over the years and reached a peak in 1989 when 680 pupils were enrolled and 21 teachers were on staff. In those years, there were five or six classes in each year group with an average class size of 36. From then there was a gradual reduction in the number of school going children in the catchment area and the school population decreased accordingly.

There are currently 383 pupils on the roll and this number is expected to increase year on year based on increasing enrolment in the Junior School. A new dimension to our pupil population today is our international pupil cohort. In SFX Senior School we now have 37 nationalities enrolled. In celebration of this diversity we schedule an International Day and also International Sports Days on our annual calendar of events.  There are currently 21 teaching staff, 8 SNAs, a full-time secretary and caretaker. Mr. T.P. Parker was appointed principal in 2007. Following his retirement in 2015, Ms. Adrienne Darby was appointed to this position.

The school also has a very active Parents’ Association. The PA support many school activities and are also involved in policy formation. The annual Christmas Fair and Sponsored Walk are highlights on the PA calendar of events.

In the early years of the school, the grounds were in very poor condition. A couple of years into the life of the school a group consisting of large numbers of parents and teachers, decided to tackle the problem. Plans were drawn up, shrubs and trees were planted, the areas intended as greens were rotovated and grass seed planted. On many Saturdays and spring and summer evenings, groups were to be seen giving of their time to make the grounds what they are today – something of which we are very proud. The school grounds continue to be maintained to a very high standard by our caretaker Brian Donegan who also teaches the children some wonderful lessons on gardening, growing everything from strawberries, pumpkins and an array of vegetables (which some teachers use to cook soup!) to the spectacular sunflowers ready to greet us on return to school each September.

The school continues to grow and develop with each generation of pupils.

And so, with the collaboration of staff, parents and the Board of Management, St Francis Xavier Senior School continues to grow and develop, building on the legacies of the past and moving forward to realise the dreams and hopes of a new generation of pupils and teachers.